That was a lot of background on the Cameo’s, huh?  Let’s get on with learning about the newest additon! The box.  I think it’s probably helpful to see it, in case you receive a box that doesn’t look like this, you might want to go over the machine really well to make sure you actually have the Silhouette Cameo 3.  I like the fruit on top! Yes, Bluetooth.  That is definitely one of the biggest selling points of this machine.  This is Silhoutte’s first Cameo that has Bluetooth capabilities. I bought this bundle deal from Amazon and all of these things came with it.  If you buy the Silhouette Cameo 3 machine and it’s not part of a bundle, you can count on receiving the machine, a mat and all of the cords you’ll need to get started. These things were part of my bundle, but you can buy the Deluxe Tool Kit (or the regular tool kit), Metallic Sketch Pens, regular mat and PixScan mat individually.  You can buy more self-adjusting AutoBlades too.  One of the nice things about this machine is that the new AutoBlade will adjust to the blade depth that’s associated with the material you’re using, which you’ll choose in the software settings.  This machine will also accept the previous Silhouette blade.  So, if you’re like me and stocked up on those, you haven’t lost anything.

Inside the Silhouette Cameo 3 Once you open the Silhouette Cameo 3, you’ll see a few new things: an open storage area on the far left, a dual head carriage for a blade, pens and other tools, and a pull out tray. This area on the far left can hold either the AutoBlade or the ratchet blade, as well as Silhouette Sketch pens. You’ll see that the pull out tray is made to hold tools and the cross cut blade that goes on the back of the machine.  We’ll see that in a minute.   What’s interesting about the pull out tray are those tiny fold out arms.  See them?  They’re made to extend the mat intake area.  Look below and you’ll understand it better. See?  Folding out those little arms gives the mat a larger area to rest.  It’s nice because previously the mat would dip a bit.  Usually that didn’t matter, but if your mat lost it’s stickiness, it could cause your material to come up where it dipped or bent.  I used to deal with that by putting a block of wood under there.  I’m really glad that I don’t have to do that any more.  It can also be helpful if you’re using a 12 x 24 mat. Here’s a close up of the dual carriage with the AutoBlade and a Silhouette Sketch pen in the holders.  The bar can rise to 2mm and the rollers are now easier to move.  You can actually push them out of the way now, which is nice if you want to keep roller tracks off of foil, foam and other materials that can get smashed or smudged. Here is the AutoBlade on the left compared to the much smaller adjustable blade on the right.  This machine can use either blade.  Nice!

If you are a Cricut user, you may notice that now the Silhouette Cameo 3 and the Cricut Explore Air now have a lot of things in common. The Silhouette Cameo 3 has several new offerings compared to the Silhouette Cameo 2.  You’ll notice some changes in the menus.  The 3, on the left, has removed the “load media” option.  Keeping this menu fairly succinct.  The purple hue has changed too, but you still only have 3 screen color choices.  I like the pink/purple color. The Silhouette Cameo 3 now includes some helpful tutorials.  Notice the “Sounds” button?  Here’s a tutorial showing exactly how to turn off the sound on the Cameo 3. It will show you to do some basic operations that are pretty important.  For example, you can learn how to load materials, load and adjust the blade and adjust the roller bars.  I think this is a nice addition for people who are new to the Cameo, and a helpful reminder to more seasoned users.

Here are some helpful Silhouette tutorials. I’d say the most important difference between the Silhouette Cameo 3 compared to Silhouette Cameo 2 is Bluetooth.  I didn’t have any trouble syncing it to my Ipad, but once I did, I was not impressed with the app.  You can download the app for free and see what you think, but when I tried it for the first time a few weeks ago, I thought it was a mess.  That being said, Silhouette’s software has always been why I choose it over other machines.  I think it’s very user friendly.  So, I’m sure they can and will make changes to make the app rise up to meet the expectations of Silhouette users.  I’m crossing my fingers on that one, but don’t take my word for it.  Go check it out for yourself.  That’s the best way to know for sure.  After all, some people hate the Silhouette software and prefer Cricut’s.  I’ve said it before, and I’ll say it again, “The best machine is the one that works best for you.”  That goes for software too. You can see the differences here with the lids open.  The Silhouette Cameo 2 is in the front.  The 3 has the dual carriage, storage on the left, and a different overall look. When I said BIG change, I meant that the Silhouette Cameo 3 got bigger.  It’s possible that the 3 could eat the 2.  The 3 is wider, longer and heavier.  Personally, I don’t like that it had to grow up so much, but I guess I’ll get used to it.  Those cool covers (like this Hey, Gorgeous one)that fit the original and the 2, forget about it.  They will not cover the 3.  We’ll just have to get crafty! Where the Silhouette Cameo 2 had storage on the side (see this post for more about the Cameo 2), the 3 incorporates it into the front part of the machine.  Both machines have the removable crosscutter blade.  It’s helpful when cutting rolls of vinyl and excess paper.  By the way, if you’re new to vinyl, it’s a super fun!  Check out these projects for some free files and ideas. 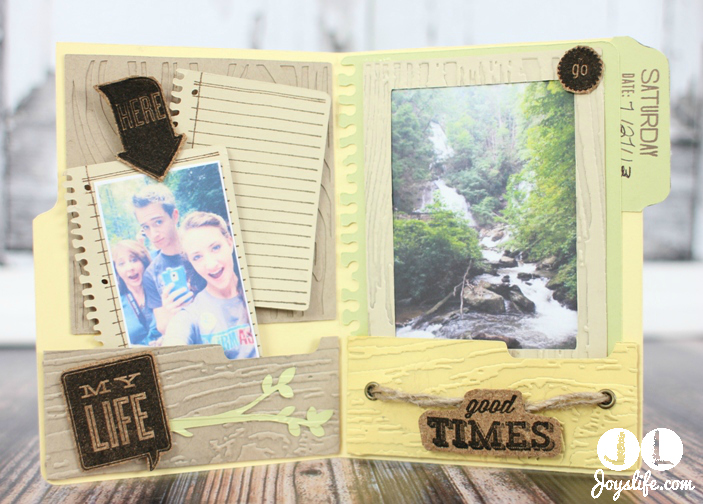 I had fun making these mini album pages today.  I’m excited to be able to look back over some fun things our family has done.  You may recognize the waterfall photo on the right.  It’s from the trip we took last weekend.  Check it out here!  I’m so glad I’m documenting these things. I’m using…

Glitter, Glitter Everywhere!  Well, he’s worth it. My Facebook Friends voted for me to make a penguin card using one of my new Joy’s Life photopolymer stamps from my “Lots of Pun” stamp set, so of course I did as they asked! 😉  This cutie pie penguin is from the Create a Critter Cricut cartridge….

Joy’s Life Featured Designer – Super Jamie Well, Jamie made it really hard for me to choose which Hippo to use first because they’re all so cute!  Take a look at her three hippo cards using the “Hi-ppopotamus” stamp from my “Lots of Pun” stamp set! Isn’t this cute?!  So lovable, Jamie!!  Thanks for making… 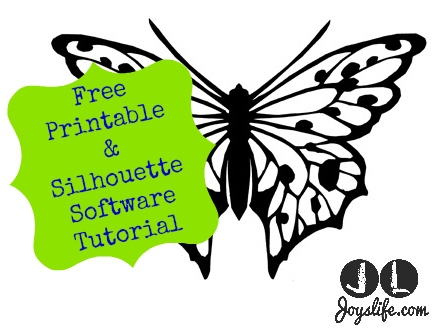 Hey everyone!  I’ve got a pretty butterfly printable for you today!  You might have an immediate plan for how you want to use this butterfly but if you don’t I have a suggestion.  Because I love to use die cut machines for my cutting, my suggestion is to import this into a cutting software.  Below…

The outside is okay (not my favorite)…but I love the inside! I found the beer paper at Archivers.  It’s by Creative Imaginations.  I used some scalloped circles that I cut with my Cricut using Mini Monograms and a circle punch to cut out the “Pour me another, Bartender!” saying.  I glued them all together and… 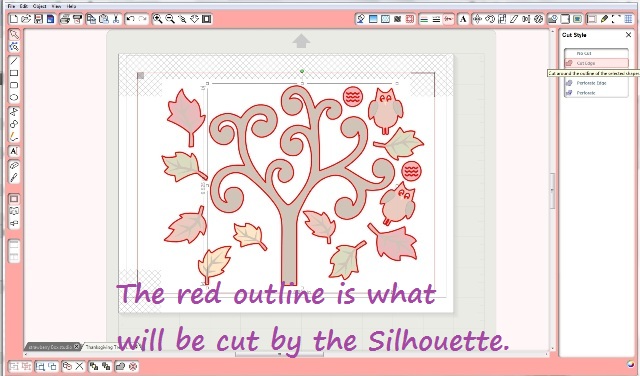 Yesterday I had one of those, “Is it JUST ME?” problems with my Silhouette Studio Designer Edition software.  I almost went crazy-er.  Part of me wants to regale you with the entire problem/discovery process, but you’re not here and can’t see my confused face, “what’s up with that” hand gestures or allow me time to…