Yes, I really stuck my name to my Cricut Expression.

Ok, I’m really starting to fall in love with my Gypsy now.  Admittedly, when it first came out…it was Suck-tacular.  Really.  It wouldn’t weld correctly at all, especially if you flipped an image.  It was AWFUL!!  It had a bunch of problems, but that was the one that made me the maddest.  However, with the most recent updates..IT WELDS EVERYTHING!!!  So, I finally got it to weld my name.  Sounds like it should have been a simple enough project, but in this creation I flipped the “Y” and it wouldn’t weld for anything.  Anyway, now it’s perfect and I love it and I just cut out my name.  I’m clearly, so proud, LOL.  I learned to spell JOY! 😛 Ahhh, sweet Gypsy.  You allow me to lay in bed and design.  You’re my best friend.  (And so is DH who brought me breakfast and my Gypsy in bed.)

So, in honor of the Gypsy finally doing what I wanted it to do, I made this cut using the Gypsy Font.

The only way to get the Gypsy Font is to buy the Gypsy. It comes preloaded on it.  The worst thing about the preloaded Gypsy Font and Gypsy Wanderings is that Provo includes these little useless cards that only have a few of the images from each cart on them.  You have to go to their site to view a booklet or scan the Internet for a cheat sheet that someone made.  Doesn’t that make you want to kick someone in the shin?  Is it just me?  Could be. Let’s take ANOTHER look at my name…hee hee hee.  Who’s in love with themself?  LOL

Ok, so after I printed out my name…or that Christmas sentiment, whichever.  I decided to run it through my new Xyron, which I’m also totally in love with.  I’ll probably run one of the children through it next.  How did I go so long without a Xyron?  Anyway, it’s really sort of stupid that I used cardstock and my Xyron, because I have a lot of vinyl and this was the perfect project for it.  Oh well, let this just be a lesson that you don’t have to have vinyl…unless you’re doing one of those projects where you have to have vinyl…LOL.  So, I ran my name through the Xyron and stuck it to my Cricut Expression.  (Where it’s going to get dirty, torn and create a mess when I try to take it off…but for now looks really cute.)

Hmmm, what can I make next?

I heart this card I made last year for my Father in Law. 😉 First, you’ve got to hover over the photo above.  Whew.  Now you can’t get Wild Thing out of your head either!  Sorry.  That was sorta mean….I wanna know for sure…my apologies, I broke into song again.  Well, if you can stop…

I heart the Bind It All!!  I took a few practice runs on plain paper just punching holes and lining them up and then I just went for it!  So fun!!  So, this was my first attempt at making a “word book” – one of the hot trends in crafting. I only wish I hadn’t… 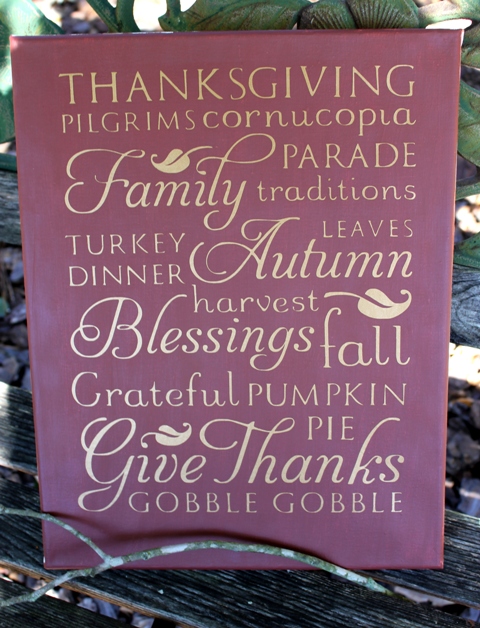 When I saw this pretty Thanksgiving word art on the Cricut Word Collage cartridge, I thought it would be the perfect project choice to decorate my mantel.  Last month, I made this sign using paint and vinyl in a different way. Need vinyl?  I like to buy mine from Expressions Vinyl. I’m using copper metallic indoor vinyl…

This is a photo of an aisle at Archiver’s.  A Crafter’s “Happy Place”, LOL. Here are some coupons to take the pain out of splurging on your necessary items: MICHAEL’S COUPON HOBBY LOBBY COUPON A.C. MOORE COUPON JOANN COUPON HAPPY SHOPPING!!

This font is from the Happy Hauntings Cricut Cartridge. WOO HOO!!  It’s the 1st Day of October!  Friends, that means that we’re embarking on a little journey…31 days of Fall and/or Halloween posts brought to you by…yours truly. 😀  To celebrate the beginning of our Fall crafting journey there’s a GIVE AWAY at the end…